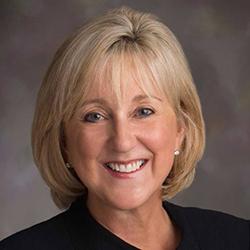 Donde Plowman was a featured speaker at HEFF 2018. You can read a summary and watch a video of her talk here.

Nebraska’s academic deans, other than those in the Institute of Agriculture and Natural Resources, report directly to the executive vice chancellor. The Student Affairs Office and the Office of Research also report to Plowman.

Plowman was previously the James Jr. and Susan Stuart Dean of the College of Business Administration at the University of Nebraska–Lincoln. She came to CBA in 2010 as the ninth dean in the history of the school, and guided the college through a transitional period, which included joining the Big Ten Conference in 2011.

Under Dean Plowman’s leadership, the college experienced rapid growth, culminating in the construction of a new $84 million, 240,000-square-foot building due to open in August 2017. It is the largest academic-facility construction project in recent years at UNL, and is supported entirely through private donations from alumni and future alumni.

In October 2016, the University of Nebraska Foundation awarded Dean Plowman the Harlan J. Noddle Award for Distinguished Development Service for her efforts in raising $150 million for the college, including more than $80 million for the new building. She was also instrumental in forming the Dr. Don O. Clifton Strengths Institute made possible by a $30 million gift from the Clifton family and the Gallup Organization.

Her efforts to bolster CBA’s mission of molding the next generation of ethical business leaders for Nebraska and the world have shown immediate benefits with the initiation of many new programs. They include the CBA Honors Academy, Career Services at CBA, a certificate program in Sales Excellence, a new master’s program in intercollegiate athletics administration that partners with Husker Athletics, and a new Department of Business Analytics and Supply Chain Management.

With the additional programs, enrollment has also increased the last six years by 22 percent, with a 14 percent increase in graduate students in the fall of 2016. Additionally, 50 new faculty members joined CBA under Dean Plowman’s tenure to support the increasing student population.