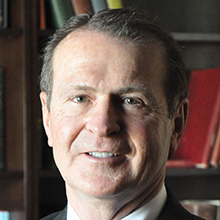 Duane Lamb was a featured speaker at HEFF 2017.

Colonel Duane A. Lamb is the Assistant Vice President of Facilities and Grounds at the University of Alabama. He became a member of the University senior leadership in July 2007 when he was assigned as AVP over the Grounds Department. In October 2008, he was promoted and became a dual-hat AVP charged with leading both the Grounds Maintenance Department and the Facilities Operations Department. He is responsible for 620 personnel, approximately 1200 acres, and the operational status of over 300 buildings with over 14 million square feet of assignable space, and a budget of $35+M. He has 24/7 continuous over-site and accountability of all campus electrical power, plumbing, general construction, custodial services, air conditioning, heating, elevators, energy, maintenance and landscape care 365 days a year.

Under his leadership, the campus has gone from no national ranking in the Facilities and Grounds arena, to ranking #3 in the nation for most beautiful university/college campuses (Newsweek), ranking #2 in the nation for most beautiful and iconic university quads (Business Insider), and ranking #1 among their university peers (Sightlines) in facilities operations (building maintenance/operations, construction renovation, electrical, plumbing, HVAC, elevator operations, grounds/landscape maintenance, energy conservation, & custodial service).

Colonel Lamb is a guest lecturer for UA AFROTC and the undergraduate /graduate classes for the College of Business on Leadership and Organizational Theory; in addition to speaking on Space and Satellite Operations for the College of Engineering, and has been the keynote speaker for the Theta Chi National Convention, speaking on ‘Leadership and Being a Resolute Man’. He is also the Faculty/Staff advisor for the UA Campus Veteran’s Association. Additionally, Colonel Lamb serves on a myriad of committees and organizations to include: UA Landscape and Grounds Advisory Group, UA Master Plan Committee, University Recreation Risk Management Committee, Theta Chi Fraternity Advisor/serving on the New Construction Board, the UA Game Day, Homecoming Committee, and Aerospace & Mechanical Engineering Industrial Advisory Board, to name a few.

In the community he serves on the Veterans Memorial Park Association and chairs the Facilities Committee, is the Commander of the Tuscaloosa Military Order of the Purple Heart Chapter, Chairman, Outback America Steering Committee (Men’s Christian International Organization), and a member of the Theta Chi Hall of Honor for National Distinguished Achievement. Colonel Lamb is a 1976 graduate of the University of Alabama with a Bachelor of Science Degree in Education. He holds a Master’s Degree in Public Administration, graduating with Honors majoring in Organizational Management from Golden Gate University in California.

Colonel Lamb served 30 years in the US Air Force, and held three major command positions, including combat Group Commander in Balad, Iraq. He has been awarded 25 military medals, including the Defense Superior Service Medal, two Legion of Merit Medals, the Bronze Star, and the Purple Heart. He is a resident graduate of Air University’s Squadron Officer School, Air Command and Staff College and Air War College at Maxwell Air Force Base, Alabama, in addition to graduating from the Joint Armed Forces Staff College in Norfolk, Virginia.