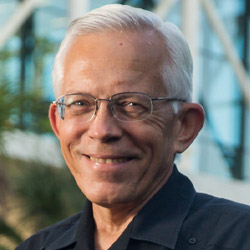 John Cal has built his professional career applying his leadership and management talents in both the private and public sectors. With 20+ years as an Army officer coupled with 11 years in the private sector, John brings unique experience to the University. He has a track record of strengthening performance, developing relationships and building organizations that deliver results. At FIU John manages real estate master planning, facilities operations, construction, insurance and risk management. Consistent with FIU’s commitment to community engagement, John served as the Founding Chair of the Florida Council for Public Private Partnerships (fcp3) from 2013-2015. He was also appointed as a member of the Miami-Dade County P3 Task Force charged with recommending policy and process guidelines for the delivery of P3 projects in the county, serving from October 2015 – February 2016.

Before joining FIU, John worked for a Fortune 500 company, first as the Operations Director for International Development, then as the Chief of Staff to the President. From 2003-2007, John was Senior Vice President, Corporate Resources, responsible for all facilities management, real estate strategy, lease management, construction, food services, warehouse operations procurement and travel. As an Army officer from 1976-1996, John attained the rank of Lieutenant Colonel. Serving in the Pentagon from 1992-1996, he was the assistant to the Under Secretary of the Army and Chairman of the Panama Canal Commission; John assisted the Chairman in developing the policy and strategy to transfer the Panama Canal to the Government of Panama.