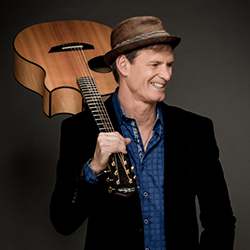 Mike Rayburn was a featured speaker at HEFF 2018.

Mike Rayburn is a two-time TED Talk Presenter, an innovative entrepreneur and Hall of Fame speaker who uses world-class guitar and comedy to teach change and innovation to corporations world-wide. He has headlined Carnegie Hall, headlined in Las Vegas, and performed more than 5,000 presentations in 20 countries on five continents.

Rayburn is a regular on Sirius/XM and morning radio nationwide. He has performed as guitarist with The Beach Boys and John Oates.

Rayburn’s keynote is called “The What IF? Keynote Experience.” You will learn three simple tools for harnessing your unrealized potential, creating and leading change, and becoming a virtuoso performer. You’ll hear amazing music including a solo guitar version of Bohemian Rhapsody. Oh, and you laugh a LOT!

No one does what Mike Rayburn does.