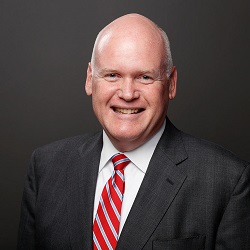 Tom Morrison was a featured speaker at HEFF 2018

Dr. Morrison is responsible for physical infrastructure and development on IU’s seven campuses, encompassing over 800 buildings at a value of over $8 billion. To date, he has overseen over 160 new major capital and renovation projects – including those completed, currently under construction, and in planning – with total expenditures over $2.8 billion.